Other gins have a story… We have a legend!!

It begins in 1689 with William of Orange who travelled to London from the Netherlands, bringing a Dutch drink – gin – with him.

It was a hit. A BIG hit. You might have heard of it.

You might not think that the founders of 1689 Gin would have much in common with King William. After all, he was a 17th century monarch; we’re two 21st century friends from Amsterdam, but fast-forward to 2016 and we embarked on the same journey – inspired to make the same gin, made to the original 1689 recipe, a hit all over again.

Following an 18 month quest, we finally discovered one the very earliest gin recipes in the rare books section of the British Library (Just call us Gindiana Jones and the Raiders of the Lost Recipe).

Only we encountered a problem. All the ingredients were listed right there in front of us… but the quantities were in code. 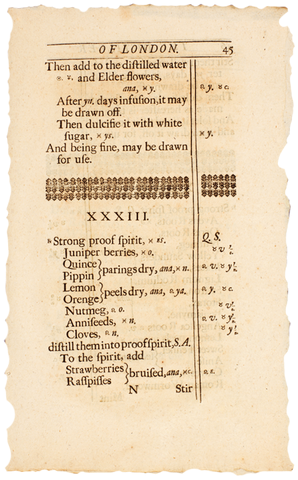 The authors of the book – The Company of Distillers of London – had encrypted the recipe to ensure that only its members could recreate it. Great news for gin-makers of 1689; bad news for us more than three centuries later.

What followed was a high-stakes race to crack the code. Could it ever be solved? Has the secret disappeared into history? Would the world ever be able to taste the gin that started it all…?

Not ones to be defeated, we headed back to Holland to Schiedam – the town where gin was born – and we turned to one of The Netherlands’ oldest and most experienced distilleries, to help us recreate the gin from the 1689 ingredients list alone using their centuries of spirits knowledge.

The result was 1689 London Dry Gin. History repeating itself… in a really, really good way.

Next came our pink gin, the Queen Mary Edition, distilled with added strawberries and raspberries, following a recipe also found on the coded document. They are both well worth the 3 centuries wait, we promise. Try it and be part of our history.